At California State University, Stanislaus, the Digitally Enhanced Classroom Project (DECP) was both a project and a competition that invited prospective teachers to foster, develop, and teach an innovative lesson or unit that aligned to the Common Core mathematics standards (CCMS) or Next Generation Science Standards (NGSS) while integrating either a flipped-classroom approach or an application from Google Docs. The project was developed so that it could be maintained for future semesters enabling: a) teacher candidates to practice the development of innovative lessons that integrate technology, b) teacher education faculty to become exposed to the current trends in classroom technology through student presentations and workshops, and c) teacher education faculty to access an institutionally developed and supported online database of video resources that can be used in their coursework with teacher candidates that effectively integrate technology into K-12 classrooms.

In the project, the Digital Ambassador invited teacher candidates to develop lesson plans or units that aligned to the CCMS or NGSS and integrated either the flipped classroom model of instruction or Google Docs. Once candidates submitted lesson plans for the DECP, each lesson plan was scored by a committee of teacher education faculty using a rubric that was aligned to ISTE-T standards  developed by the International Society for Technology in Education (ISTE, 2010).  Based on these scores, the top three teacher candidates, and their respective lessons, were chosen and the candidates were awarded an iPad.  Additionally, the top three teacher candidates were informed that they would be required to teach their lesson in a classroom in front of K-12 students while it was videotaped.

Once all lessons were recorded, the recorded lessons were added to a database on the CSU Stanislaus server where teacher education faculty can access the resource for their methods courses as a point of reference when discussing instructional technology.  Finally, towards the end of the semester, awardees were also asked to present their lesson during the “Transition to Teaching” conference supported by the California State University Stanislaus, where Google Docs and the flipped classroom model were discussed and demonstrated through poster presentations.

The photos below highlight the 2013/2014 DECP teacher candidate awardees.  Below each photo are links to their respective lesson plans. 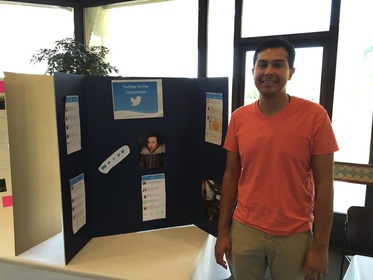 Jahir utilized the power of Twitter's by having students critically analyze, decode and summarize lines from Romeo and Juliet.  In order to set up the lesson, Jahir first had students go through a line from the play, translate it into modern day English, and then try to fit that meaning into 140 characters (which aligns to Twitter's character limit). After this was completed, his students received additional lines they had to translate and then convert into 140 characters in small groups.  After they converted the lines, they then Tweeted their them so that the class could review each other's responses while he utilized the group's tweets as a form of assessment.
His lesson can be found here:  Romeo and Juliet via Twitter 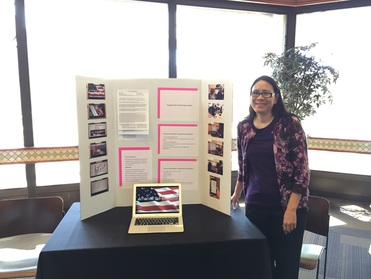 In an effort to get students' feet wet with the collaborative nature of Google Docs, Susan's lesson required that students create Google Slides presentations about the song “America the Beautiful.” The presentations were required to have various items including, the title of the song, the name of the composer,  the name of the lyricist,  the voicing, the genre, the date the song was published, and a description of the musical elements used in the song. She also required that students include an image of the score of “America the Beautiful.". She had students use the website www.cpdl.org to find all of the information about the song and they accessed Google Images to find an image of the score. A copy of her lesson plan can be found here:  America the Beautiful via Google Slides 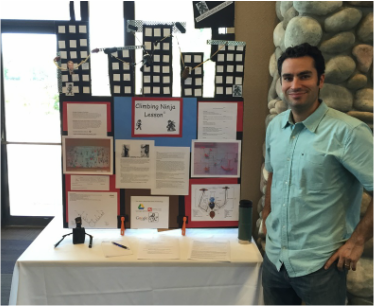 Matt's lesson was part of a unit on bones, muscles, and joints. It was the culmination of his students' knowledge on the unit and took place at the end of it. He assessed the students’ level of understanding  through a four-part project that had students create a Climbing Ninja with movable joints. To complete the project, students first created a Google Drawing sketch of a Climbing Ninja, which they created later on with items from their home.  Afterwards, students wrote a persuasive essay stating why their ninja was a superior climber using Google docs, and afterwards, they presented their paper to the class. To view his less, please see the link here:  Climbing Ninja Lesson via Google Draw and Docs. 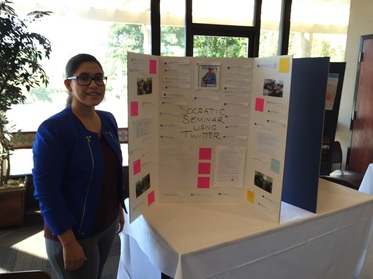 Mayra's lesson incorporated a Socratic Seminar into her lesson that utilized twitter as form of communication.  In this particular lesson, there were two groups that were formed, the outer group, and the inner group, with the outer group utilizing Twitter, rather than sticky notes or paper, to pose questions/comments. The tweets were projected onto the boards, allowing inner group students to view and have access to their peers’ thoughts. In order to access the tweets,  a hashtag was created for each group. The tweets also allowed her  to check the contributions at a later time. In addition to fulfilling secondary standards relating to English, Mayra believes the the usage of Twitter allowed students to explore how social media can be used in an alternative manner that supported their learning outcomes.  A copy of her lesson can be found by clicking on the link here:  Socratic Seminar via Twitter